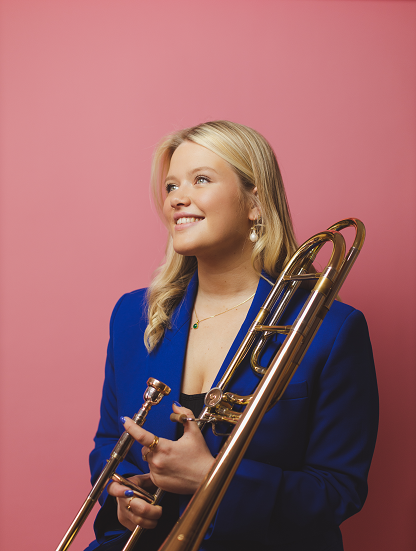 Isobel Daws began to play the cornet at the age of 3 under the joint direction of her father, David Daws, and the late Maisie Ringham Wiggins MBE. She moved onto the Trombone in September 2008 and within six months gained a scholarship to study Trombone and piano at The Purcell School of Music. After 8 years at the Purcell, she moved to Chetham’s School to study A Levels.

Now in London, Isobel is currently in her fourth year studying at the Royal Academy of Music with Matt Gee, Peter Moore and Ian Bousfield. She was one of the five finalists in the BBC’s Young Musician of the Year 2014 Brass Category Final, and in 2018 she was once again in the Brass Category Final where she went on to be crowned the winner. In 2017, Isobel was the winner of the BBC Young Brass Award playing live on Radio 2. Isobel is alumni of the Junior Guildhall School of Music and Drama, The National Children’s and Youth Brass Bands of Great Britain, and The National Children’s and Youth Orchestras of Great Britain.

Isobel recorded her debut solo album with World of Brass in January 2022.

Proms in the Park!

Proms in the Park is an open-air music concert featuring a 2 hour orchestral programme with all the ‘last night of the proms’ finale favourites, all in the surroundings the beautiful lakeside venue, Tatton Park.